It Could Happen to Anyone BUT Not Here! #SCAMALERT 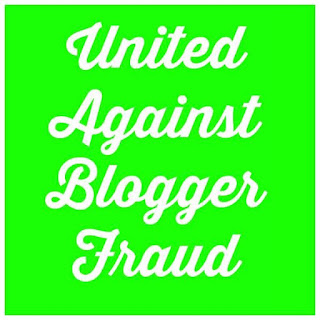 It has come due time to share with the entire Make Our Own Network some facts about a Blogger who is defacing our image, stealing from brands, giveaway entrants, and even other bloggers.  Because of the extreme upset this has caused me as a blogger with integrity and morals, I have waited to share the ugly details.  PLEASE read this and understand that this type of behavior it absolutely not acceptable.  All giveaways through the Make Our Own Network are honored, all sponsor commitments are fulfilled, all payments are always made immediately, all emails sent to MakeOurOwnNetwork@gmail.com are responded to in a timely matter, and most importantly all legal terms and conditions are followed 100% of the time.  Everything in this post has been documented and tracked now legally.


Bloggers and Sweepers you need to be aware of the fraud and embezzlement that is happening in the cyber world.  Teri Hardy Hatland aka. Mom Powered Media, Motherhood Defined, Mom to Bed by 8, Iowa Mom, Midwest Traveling Foodie, No Coupon Diva, Secret Southern Couture, and probably many more alias's we are still unaware of is the blogger, I hope you all will stay far far away from.  I (Randi) stood up to her years ago regarding her practices and she quickly blocked me from her groups (May 2013).  Few seemed to care other than my close blogger friends who seemed to have the same gut feeling about her.

I didn’t make a big deal though because I didn’t have anything vested in the professional relationship between the two of us.  I wrote her off as just not a good person and went on with my own blogging ventures. I continued to watch over the past few years commenting when I would see something come up regarding her name or blog but still felt that people had to form their own opinions of her.  I feel terrible for not warning others when I first knew as maybe if I had many of my friends and peers wouldn't have been taken for thousands of their hard earned money.  YES THOUSANDS.

However, the standing by stops NOW!  Below are several of the fraudulent complaints made against Teri Hardy and her "businesses".

There was an MPM Conference scheduled to be held in Minneapolis from August 7, 2015 to August 9, 2015 which was canceled.  The bloggers we have spoken with who purchased tickets have not received a refund. The hotel was not notified AND Teri is still accepting reservations on the facebook page for Mom Powered Media which links to Eventbrite.  The conference website was removed as of 5/18/15 at 12:58AM. 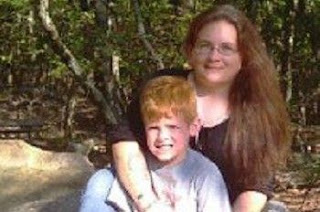 "The Cyndee Wells Fund as well as the auction that was held May 27-28, 2014 has come into question as to whether the family has received the donations many bloggers sent in. There are several bloggers who purchased items through the auction that was to raise money for the family that have never received their items but have made their payment in good faith. (at last count the estimated amount of funds raised from the auction was well over $9,000 dollars)

An undisclosed member of the family has indicated that money was still owed to Cyndee for her work with the company in question that was never paid. They did receive the funds from the GoFundMe account (which the company in question matched up to $1000) but as of 05/28/2015 not one dime of the funds raised through the Cyndee Wells Auction(s) has been paid to the family."
I personally donated $585.  While I received my ads and miscellaneous products from other bloggers.  My ads were never placed on Teri's websites (Mom to Bed by 8 and Secret Southern Couture).

"September 2012 sent product and after two months of contacting her with no response, her name was added to an email response as to why I would not be working with bloggers anymore.  She drug out the review process by sending me an email in December 2012 and then guilted me by telling me that she was undergoing cancer treatment.  She started advertising for a giveaway for the product in January 2013 which was never confirmed and when I emailed her regarding this, she then said that she would have the review posted 02/11/13.  I don't even respond to blogger inquiries anymore.  I'm so busy that I don't have time for the drama or to chase people down to enforce them upholding their end of the agreement. " ~Brand Owner
I worked very hard on getting in touch with Teri for this brand and her responses were nasty to both the Brand Owner as well as myself.  She threatened to ruin me if I continued to bother her over one stupid product.  This is when she decided to block me from her groups.

"OWNER spoke with me about becoming a partner for COMPANY. I would own 33% of the company for $50,000. She claimed that she had made over $300,000 in the past year. With all of her blogger opportunities and services that were being sold to companies by herself and other employees (some of which paid money to her to earn a higher commission, and a percentage of what COMPANY made as a whole) it sounded like a great opportunity. Not only that, the COMPANY conference that was coming up August 7th-9th 2015, OWNER said I would personally make anywhere from $40,000 to upwards of $60,000, as my cut of profits...She also stated at anytime if I had to leave for any reason, she would just buy back my share of what I put in, which at this time is $6011.45. OWNER wrote up contracts (from an online source, even though she said her lawyer did them) emailed them to me. I signed them and had them notarized and then overnighted them to her on January 4th, which is what everything was dated for. As stated by her, as well as in the contracts (COMPANY Partnership Agreement, Loan Agreement, and an agreement for a business we were starting together called COMPANY) she was to provide copies of these signed and notarized (on her end) agreements within 7 days. I never received them, then I moved and things were chaotic, so it slipped my mind. She was also supposed to file the businesses, REDACTED and REDACTED, in the State of Iowa, with me listed as part-owner. This was never done. There are no businesses with these names or anything by her in the State of Iowa. Nothing is registered. Just with those two things alone OWNER is in breach of contract.

01/04/2015 – COMPANY Agreement signed and notarized, mailed overnight to OWNER
Total paid by me to COMPANY equals $6,011.45" ~Blogger
This is not the first time I've heard these amounts or story from other bloggers over the past three years. 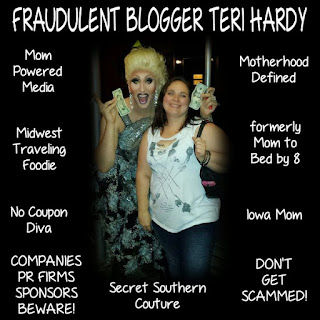 "I know who you are talking about. It pisses me off. That person stole close to $2,000 from me alone and I don’t know how much from others. And then she is ruining it with companies. Honestly I have companies that won’t work with me because of said blogger." ~Blogger

"Patti is out $500. She was employed by Teri to write for Mom to Bed by 8. She wrote several posts and was never compensated for the posts as agreed. Teri changed the author name on the posts to her own and has refused to take them off the website after repeated attempts to contact her have been ignored. " ~Blogger
Over three years ago, I wrote quite a few sponsored posts for Teri and getting paid was always a nightmare.  Payment was very little and would come 90 days or more after and I would have to email her constantly to "remind her".  I was paid though for each post eventually.

Please take a second to read this article "An Alert for the Blogging Community" written by a peer with factual statements and documents regarding all complaints filed against Teri Hardy.

We are asking that you please complete this survey if any of the following applies to you: 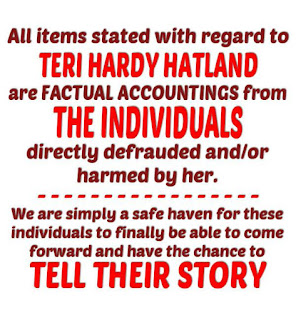 You can find the survey here – https://www.surveymonkey.com/s/X2R5N7L – just fill in as much information as possible so that it can be turned over to the proper authorities and justice can finally be served to bring about this fraud that has been ongoing for years.

There is a Pinterest Board with all of the documents uncovered that show this is an issue that goes back many years, and includes defrauding her own mother who had to take her to court for stealing from her.

ALSO, We are hereby giving notice to all affiliates, companies, representatives, public relation firms, fellow bloggers that are affiliated with any of Teri Hardy’s websites that we will no longer do business with you. Any individual who blatantly disregards the code of conduct that professional bloggers adhere to and does not follow through with providing giveaway prizes won, that continues to defraud his or her fellow bloggers is not someone Make Our Own Network wishes to be associated with.
*Read my Disclosure

Posted by A Lucky Ladybug